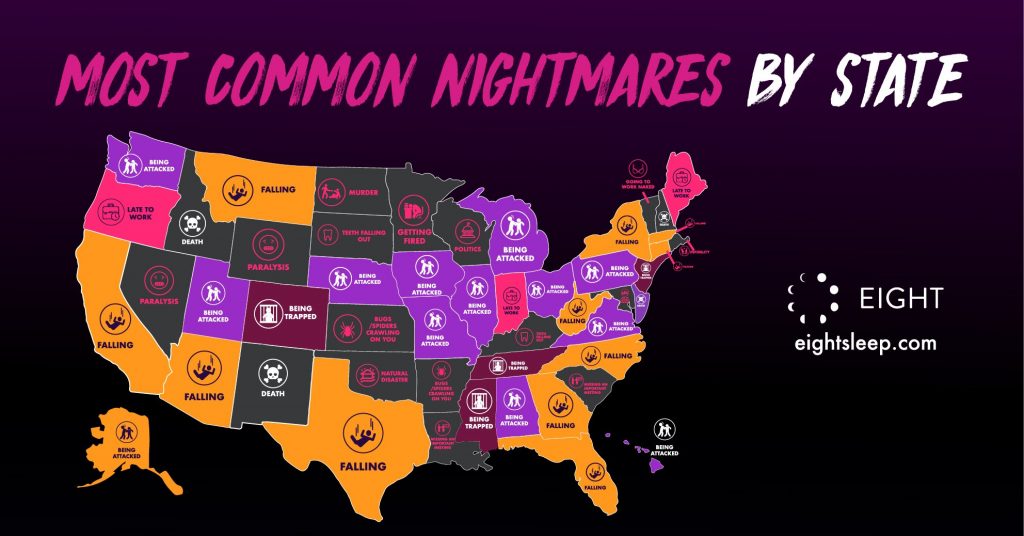 The Most Common Nightmares In The USA

Have you ever dreamed that you were falling and jolted awake right before you were about to hit the ground? Probably.

Turns out, falling is the most common element in dreams. Since falling dreams produce an uneasy feeling, we're going to say it's a nightmare. Nightmares are bad dreams that awake you from deep sleep. They occur most often during rapid eye movement (REM) sleep and could be explained as the unconscious manifestation of your everyday fears and anxieties. Although dream analysis is subjective, many people believe falling indicates a loss of control. When people feel overwhelmed in their lives, they may experience nightmares about falling. We surveyed 1,000 Eight users and found that 42% of them have had a falling nightmare. The second most common nightmare amongst Eight users was being attacked at 41% followed by being trapped (34%), death (32%), showing up late to work (29%).

Our survey also supported a 2009 study showing that women are more likely to report having nightmares than their male counterparts. We found that women recall their dreams upon awakening 17x more often than men. Women also admitted to having infidelity nightmares, and had them 38x more often than men. Since women tend to pay more attention to their feelings, they are more likely to carry their feelings into bed and subsequently dream about them. Whether women experience nightmares more than men or just report them more frequently is yet to be determined.

Although nightmares can be scary, they didn't seem to affect the quality of one's sleep. Sleep scores remained fairly consistent between those who recall their nightmares and those who do not.

Check out the rest of our findings below: