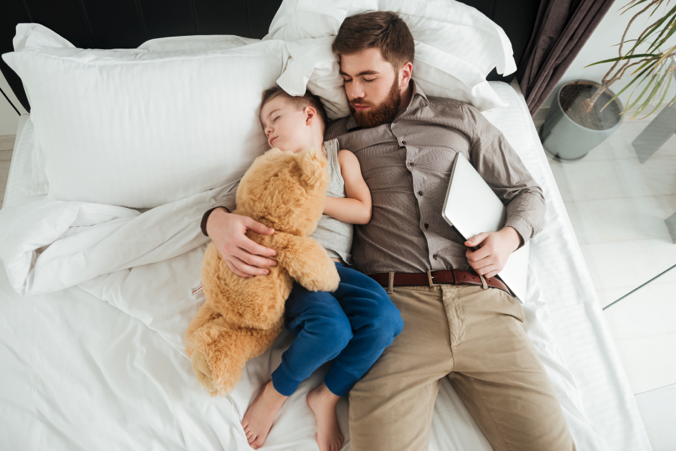 Following our preliminary research on the quality of sleep for parents, which found that fathers get less sleep than mothers, we analyzed the data again to explore what other factors may affect the quality of a father's sleep. We found that for fathers with children ages 0 to 5 years, their sleep suffered significantly more than for those with teenage children ages 15 to 20.

Other factors were considered, such as occupation and marital status, but those did not have a notable impact on a father’s sleep. Being married or in a domestic partnership had a slight significance that deserves to be mentioned. On average, 47% of married fathers rated their sleep as “good” compared to 39% of divorced fathers. Married fathers also slept the longest with 7 hours 23 minutes while divorced fathers only slept an average of 6 hours 24 minutes. Moreover, divorced fathers had the lowest sleep score -  61.5. Despite this stark contrast, further analysis is required due to a skewed number of married participants.

The conclusions from this report confirm previous studies about fatherhood and sleep. According to a 2013 study, new fathers missed more sleep than mothers. Of 21 mother-father pairs enjoying their first infant experience, fathers actually got less sleep than the mothers and experienced more confirmed sleepiness. The good news is that sleep gets better with age. As the children grow up, fathers reported higher sleep quality and saw higher sleep scores; whereas, mothers did not follow that pattern.