If you’re a hot sleeper like me, find yourself continually waking up with night sweats, or are simply looking for a way to sleep cooler throughout the night, the Eight Sleep Pod Pro Cover is what it’s made out to be: a complete game changer. After purchasing a new mattress last year, I found myself waking up multiple times throughout the night due to overheating, and I began to seek out solutions for regulating my temperature during sleep. Specifically, I wanted to find something that would allow me to incorporate temperature regulation into my current mattress so that I wouldn’t have to give up the long-term investment that I had already made. I liked my current mattress, but waking up with night sweats was impeding my sleep quality. Following my test of mattress covers, I can say that I’ve genuinely never been more satisfied with my sleep until deciding on the Pod Pro Cover.

After doing some research, I decided to test out the top 3 most popular products on the market that would aid in my quest for a solution to uninterrupted, cooler sleep. I’m all about long-term investment, so finding the highest quality product was extremely important to me, especially so that I wouldn’t regret the decision later down the line. I decided on the Chilipad OOLER, the BedJet 3 Dual Zone and the Eight Sleep Pod Pro Cover; I wanted to give each of these a fair shot and avoid external “noise” or conflicting opinions, so I settled on a 2-week test period for each and took regular notes following each night of sleep. I set up each of the products on my own by following the manufacturer instructions and complied with all of the proper guidelines. I’m excited to share my findings below and hopefully better inform anyone who may be in the same position that I was. Needless to say, I haven’t had any night sweats since committing to the Pod Pro Cover, and I’ve never been happier with the quality of my sleep. 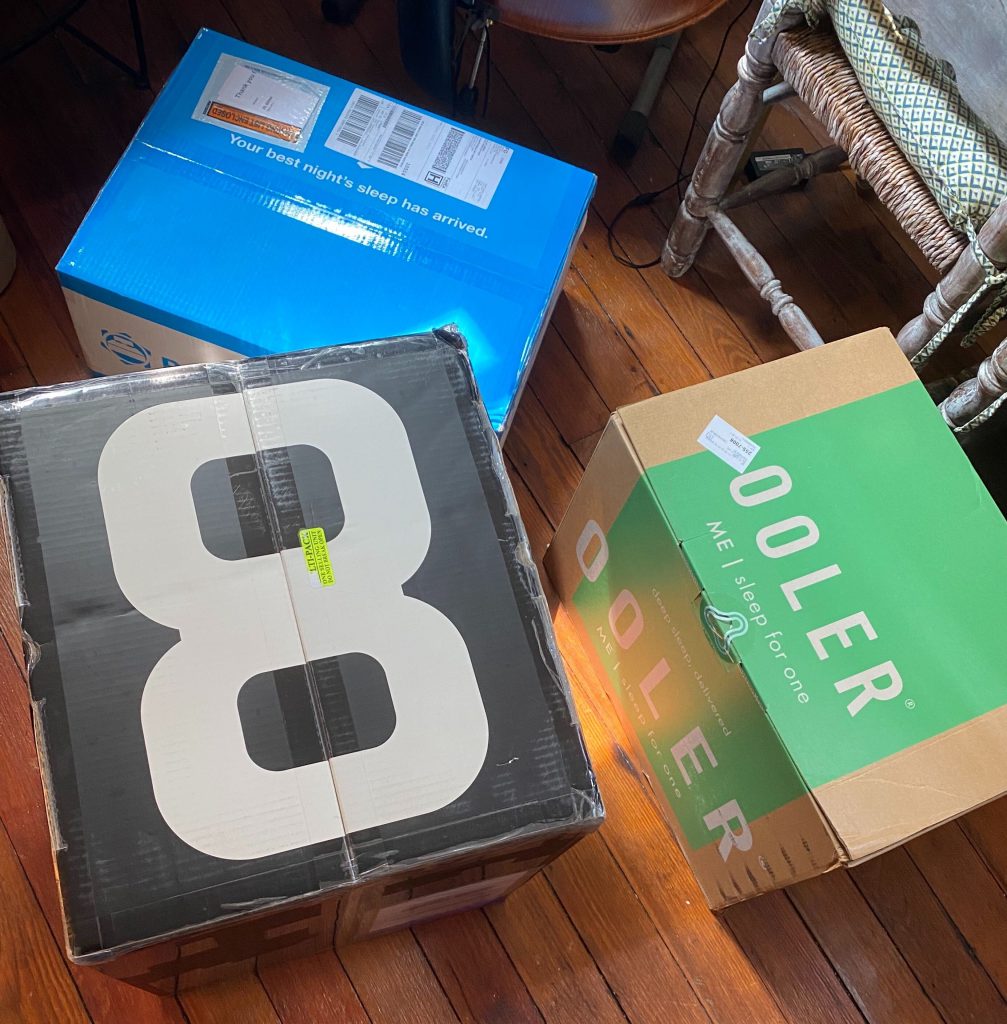 All three products (the Chilipad OOLER, the BedJet, and the Pod) allowed me to adjust the temperature as expected, but two things that distinctly stood out to me with the Chilipad OOLER and the BedJet were their uneven and sub-par cooling effects. Specifically, the OOLER consists of stiff and narrow tubing that you can actually feel under you while you’re sleeping. This detracted from the comfort that I wanted to maintain with my current mattress. I also felt that the cooling effect was only taking place in certain pockets, rather than evenly distributed throughout.

As for the BedJet, I didn’t realize that their cooling method utilizes air channels (as opposed to water). Water has a greater thermal transfer than air, I was somewhat wary about how robust the cooling effect would be throughout the night. I found that the degree of cooling was not very impressive. Most bothersome, though, was that the air movement caused the sheets on my bed to blow around and the noise level of the fan itself made it difficult to fall asleep. Overall, not a great first impression with the BedJet or the OOLER.

The Pod Pro Cover, on the other hand, astonished me as I soon realized that the cover quickly cools down to low as 55°F. I tend to run fairly hot in general, and even more so in my sleep, so this feature immediately caught my attention. The hype turned out to be spot on, as well; not only does the Pod Pro Cover cool exceptionally fast, it also maintains your temperature preference consistently throughout the night, and adapts based on your biofeedback. I was able to schedule changes in temperature to take place throughout the night as I moved into different sleep stages, which I thought was fascinating. Since I was so impressed by this feature, I reached out to Eight Sleep directly to learn more about their future innovations alongside this component, and was thrilled to hear that they are continuously iterating on their temperature control feature to make it even more advanced. That, in my perspective, is amazing, since I’m able to get even smarter temperature regulation on an ongoing basis.

The Pod Pro Cover also has warming abilities that can reach up to 110°F, which I thought was great to keep in mind for when the winter months roll around. Although I’m single, I was also thoroughly impressed that both sides of the Pod Pro Cover can be set to different temperatures for the case of partners who have alternate sleep climate preferences; and unlike the BedJet or the OOLER, there’s only one unit needed to power both sides of the bed.

As I mentioned briefly above, I was hoping to find a complimentary temperature regulation option that wouldn’t sacrifice the comfort of my existing mattress. Out of all of the options tested, the Pod Pro Cover fully satisfied this need. The Pod Pro Cover securely zips onto the mattress, allowing it to stay put all night without any slippage or movement. The OOLER, on the other hand, moved around and bunched up underneath me, which was incredibly bothersome and frustrating especially since I had to realign the cover during and after each night of sleep. As previously mentioned, the BedJet is powered by air, which made it feel as if I had a fan blowing directly on my skin all night long. I found that I was waking up with the sensation of dried out lungs and skin, which was quite unpleasant. 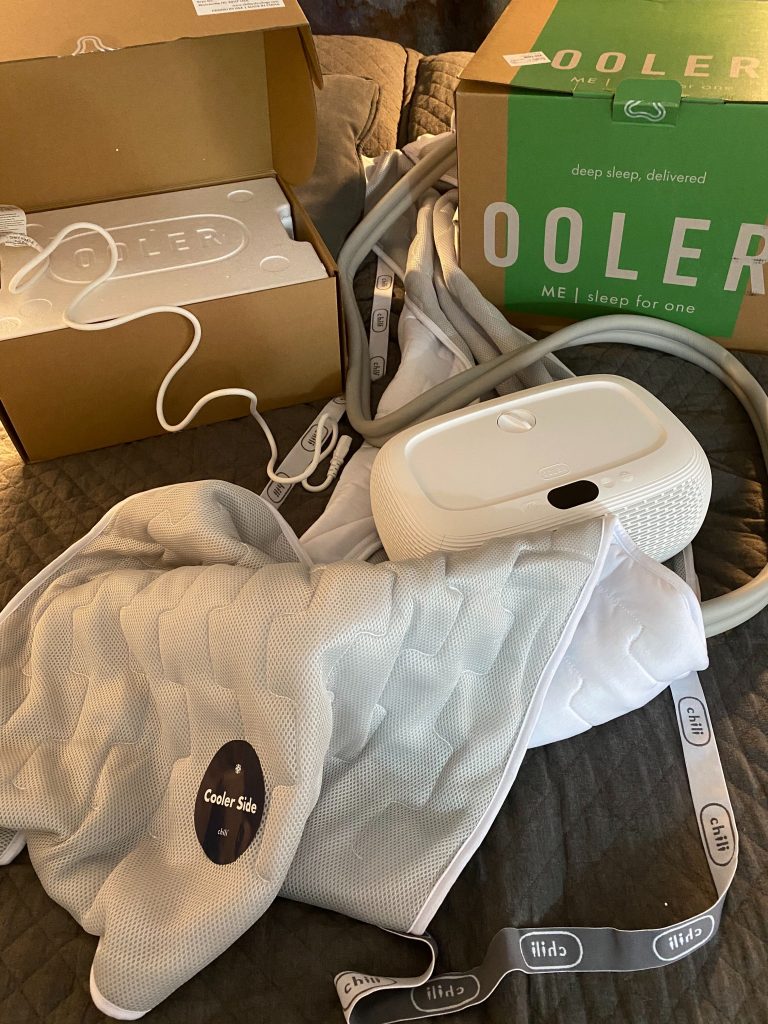 Another big takeaway after my 2-week trial period with the 3 different mattress covers was the user experience that each company was able to achieve. This is something that I find to be central in making or breaking my satisfaction; I want something that’s both easy to use and informative. Based on my test and 2-week implementation of each product, the Eight Sleep app is by far the most sophisticated solution on the market. I assumed this to be true from the very beginning after seeing that the Eight Sleep app had over 600 positive reviews on iOS alone, in comparison to around or just under 100 for both Chilipad and BedJet; this assumption proved to be true once I downloaded each app and began playing around with them during my testing periods. It was clear that Eight Sleep’s app was completely central to their user experience, meanwhile with Chilipad and BedJet, the apps felt like they were more of an afterthought; i.e. something that was “thrown” together at the last minute just to be able to say that they had an app included with their products.

In particular, one of my favorite features of the Pod Pro Cover is the Active Bio Sensing that’s built into the product; this technology assists in generating a daily health report that is visible through the app each morning. It reveals metrics such as time slept, heart rate variability (HRV), and sleep consistency, which are all central to monitoring your sleep effectively as well as your overall health and wellness. My favorite part about the app is that it generates a “Sleep Fitness Score,” allowing you to track your nightly sleep performance over time and making it simple to understand how individual sleep metrics combine into one final takeaway for your prior night’s sleep quality. The Eight Sleep app is also constantly updating, making it equivalent to the “Tesla of beds” in my perspective; it makes my initial investment in a sleep solution get even better over time. Since adopting the Pod Pro Cover full-time after my trial, I’ve gained massive value even out of just a few updates.

Something that consistently stands out to me with products is their ease of user experience. I want to feel that I’m navigating a new product seamlessly, without becoming frustrated or confused by how to set it up. I’d like to think that most people are ready to move past reading through complex and lengthy manuals, and Eight Sleep definitely provided the easiest set up experience compared to Chilipad and BedJet. Don’t get me wrong, it wasn’t “impossible” to figure out how to set up my OOLER and BedJet (I was able to get them onto my mattress after all), but the difference in set up was very evident. The Eight Sleep app actually provides visual and text-based step by step instructions for how to set-up the Pod Pro Cover. In comparison to my journey in sorting out how to set-up the OOLER and BedJet, I’d say Eight Sleep saved me a significant amount of headaches and time, which is definitely something worth noting.

I don’t know about you, but when it comes down to furniture and decor that I’m deciding to put into my living spaces, I try to refrain from adding something that's “tacky” or looks out of place. The Hub, which is the cooling reservoir that comes with the Pod Pro Cover, honestly looks like an Apple product; so if you’re like me, that’s an aesthetic that I’m immediately willing to add to my living environment. In comparison, the OOLER’s reservoir is much smaller so it has to be refilled more frequently, and the design is far less refined. 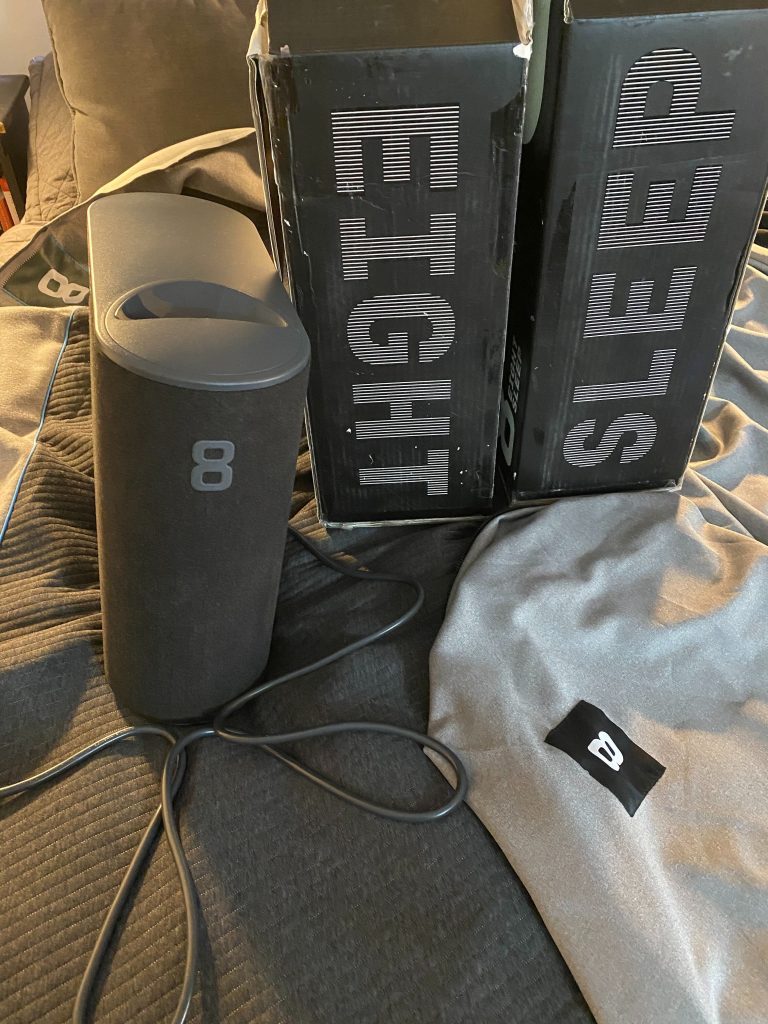 Like many customers, I always check out the reviews of a product before I even consider purchasing it; having done my fair share of product review investigation over the years, it’s quite rare to come across reviews of a product that call it a “total game changer”, “life changing”, or “the Tesla of sleep.” After seeing these on Eight Sleep’s reviews page, I was confident that this was by far the best product on the market in the category, and my experience with the Pod Pro Cover reinforced this.

The key takeaway: the Pod Pro Cover is a clear standout

If you’re looking for an effective way to regulate your body temperature as you sleep without sacrificing the comfort of your current mattress, I would say that the Pod Pro Cover is by all means—the way to go. On top of being seamless to set-up and use, the Pod Pro Cover’s ability to cool was unparalleled compared to the other two products I tried. Aside from being a perfect solution for hot sleepers, anyone who is interested in getting personalized insights on their sleep will truly love all of the data that the Eight Sleep app provides in an easily digestible format. My experience with the The Pod Pro Cover holds true to the value spoken on its behalf by hundreds of passionate users across the board. If you’re on the hunt for a reliably cool night sleep, the Pod Pro Cover is your best bet. 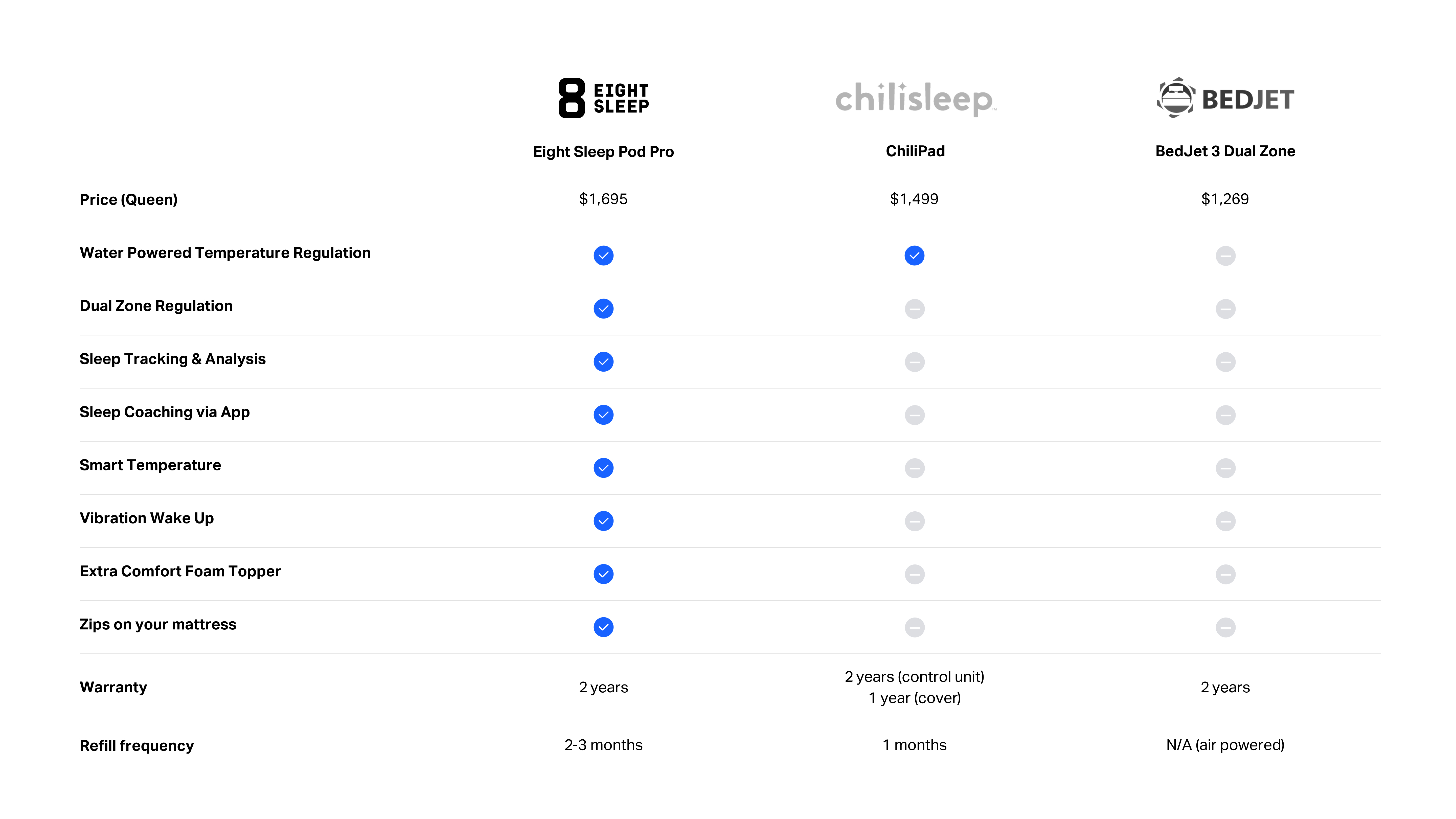 *Pricing and information updated as of 2/25/2022 based on company websites.