Our latest research study shows that people experience a significant improvement in their sleep and cardiovascular health after using Eight Sleep’s Pod.

10% improvement in deep sleep after sleeping on the Pod

Research shows that keeping your skin temperature within a tight range during sleep enhances deep sleep (ref, ref), which is essential for optimal mental and physical performance (ref). We found that after just one week of sleeping on the Pod, individuals experienced, on average, a 10% increase in deep sleep. What’s more, this improvement was sustained after people continued to use the Pod for the rest of the month.


Table 1. Changes in Deep Sleep Before vs. After Sleeping on the Pod 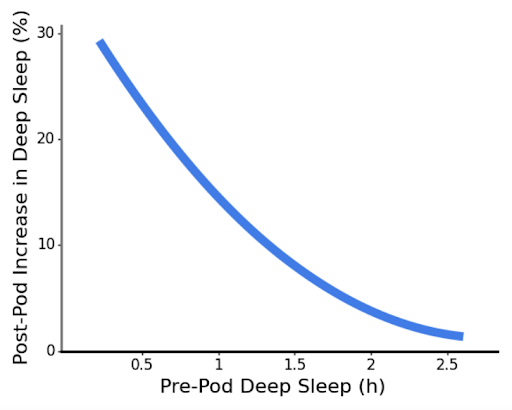 Key Takeaway #1: As deep sleep is crucial for several key processes in the body including learning and memory, recovery from exercise, immunity, and metabolism (ref), sleeping on the Pod can be highly beneficial for people struggling to get optimal amounts of deep sleep each night.

6% increase in HRV after sleeping on the Pod

Staying within a tight skin temperature range during sleep is known to positively affect cardiovascular health by increasing HRV and reducing HR during sleep (ref, ref). HRV is a number that indicates how much the time varies between your heartbeats. Generally, a higher HRV indicates a balanced nervous system, better fitness, and good physical recovery from exercise. The opposite is true for sleeping HR, where generally, the lower your sleeping HR, the healthier you are.

Table 2. Changes in HRV before vs. after Pod use.

Key Takeaway #2: HRV naturally decreases by 10-15% per decade with aging (ref), so sleeping on the Pod could help to offset these natural HRV changes with aging.

Improvements in Sleeping HR with Pod Use

Sleeping heart rate (HR) is linked to longevity, and so the lower your resting heart rate, the healthier you are. On average, subjects’ sleeping HR decreased by ~1 beat per minute (bpm) after using the Pod. This may seem insignificant, but actually it’s a really big change when it comes to your sleeping HR. To put it into context, a reduction of 1 bpm in sleeping HR is equivalent to a 1.6% reduction in risk of death from any cause (ref).

Moreover, subjects with average- to below-average resting heart rates (i.e. >70 bpm) had the largest decreases in sleeping HR after using the Pod. In fact, these individuals experienced a 2 bpm decrease in sleeping HR on average. This is equivalent to a 3.2% reduction in risk of death (ref). And if that didn’t convince you the changes in sleeping HR are meaningful, a 2 bpm magnitude of decrease in sleeping HR is similar to what you’d expect to get from a 12+ week-long exercise intervention in yoga, tai-chi, or strength training (ref).

Table 3. Changes in HR before vs. after Pod use

Key Takeaway #3: Individuals experienced 1-2 bpm decreases in sleeping HR after using the Pod, which is similar to HR changes seen after three months of exercise training, and may reduce the risk of all-cause mortality.

Research shows that there is a strong positive association between sleep quality and physical activity levels (ref, ref). In fact, we found that after using the Pod, subjects exercised harder, completing 8% more moderate-intensity exercise and 65% more high-intensity exercise on average. Those who logged the least amount of exercise before using the Pod had the most dramatic increases in physical activity after using the Pod. As exercise has been shown to improve sleep and cardiovascular health (ref, ref), it’s likely that the better sleep with the Pod improved exercise intensity, which then further improved sleep.

Our findings demonstrate that the Eight Sleep Pod significantly improves deep sleep, HRV, and sleeping HR after just one week, all while you sleep. Individuals continued to see these improvements even after using the Pod for one month. Most importantly, the improvements in sleep and cardiovascular health with the Pod are greatest in those who need it most.

Two months of data were analyzed from 310 subjects that were recruited to participate, including 257 males, 47 females, 6 not reported, with an average age of 42 years old (ages ranging from 20 to 79 years). Subjects wore an Oura Ring for the entire two months. For the first month, they did not sleep on the Pod. For the second month, subjects slept on Eight Sleep’s Pod. To be included in the study, subjects needed to wear the Oura Ring for at least 6 out of 7 days during each the pre- and post-Pod week for the seven-day analysis (n=310), and for 24 out of 30 days during each the pre- and post-Pod months for the 30 day analysis (n=261). Subjects were required to sleep on the Pod for at least 25 out of the 30 total nights during the post-Pod month. Subjects were allowed to choose any temperature setting on the Pod each night. Because the study is retrospective, the subjects’ behaviors were not affected by the study.

Each individual’s sleep and exercise data from the Oura Ring were analyzed to compare physiological values before vs. after using the Pod. Data from the one-month before subjects started using the Pod were considered their baseline period (i.e. pre-Pod), and data from the seven days (i.e. one week) and 30 days (i.e. one month) after using the Pod (i.e. post-Pod) were compared to the baseline period. Dependent t-tests were used to compare individuals’ HR, HRV, exercise intensity and duration, and deep sleep durations pre- vs. post-Pod, where a P<0.05 defined significance. Compared to pre-Pod values, using the Pod for 7 to 30 days led to significantly lower HR, higher HRV, and more deep sleep (all P<0.001).

The study results presented are aggregated across 310 subjects. Individual results may vary.