How Sleeping on a Pod Pro Improved my Whoop data

Before I started using the Pod Pro, I had trouble controlling my body temperature at night. As a result, I experienced regular sleep disturbance due to temperature changes.

But that changed when I started using the Pod Pro. In fact, I’ve been wearing a Whoop Band for almost two years to track my sleep metrics, and the data shows that I’m now getting 40% restorative sleep almost every night as opposed to the 35-40% I was getting before.

That’s important because sleep scientists suggest that you should spend 40% of your sleep in restorative stages (deep and REM sleep combined).

Whoop has a journal where you can record specific lifestyle changes and behaviors. The only problem is that the journal doesn’t have an option for a temperature-controlled mattress.

I would have loved for Whoop to include that option to make it easier to visualize the data right inside the app. However, since I know the night I started sleeping on the Pod Pro, I’m able to personally track the changes in my Whoop health KPIs since that time.

The biggest change I’ve seen is that I get more REM sleep compared to six months ago, when I was sleeping on a regular mattress. Since switching to the Pod Pro, I now get between 2 and 3.5 hours of REM sleep, compared to the 1 to 2 hours I was getting before sleeping on the Pod Pro.

My deep sleep has also slightly increased, by an average of 3 minutes per night. While that’s not a huge difference, the more deep sleep I get, the quicker my body can recover from the stressors of the previous day.

I also noticed a slight change in my respiratory rate. This is important because respiratory rate tracks not only how someone is breathing, but also the rate at which they are breathing (you can learn more about that in this study).

While there are many factors that could have affected my Whoop data, I did notice a change in the data at a particular point in time. And I can also tell that I feel better every day since sleeping on the Pod Pro.

How my Eight Sleep and Whoop data are correlated

Every morning, I look at both my Eight Sleep and Whoop data to see if they’re in sync with each other (and also in line with how I’m feeling). Most of the time, my Whoop and Eight Sleep data are in sync — and my deep sleep is always in sync on both devices.

The only difference I notice is that Whoop reports that I get more REM sleep than Eight Sleep does.

This could be due to how the data is captured. The Eight Sleep Pod uses health-grade, piezoelectric pressure sensors in the Active Grid to detect body movement, heart rate and breathing patterns, whereas Whoop uses light sensors on the band to detect blood flow.

What happens when I set my Pod to a cooler temperature

When I first started sleeping on my Pod Pro, I had it set to very cold (-8). At that temperature, Whoop reported that my recovery and HRV were noticeably higher than when sleeping on my traditional mattress.

On that first night, I had 2 hours and 5 minutes of deep sleep (an increase of 15 minutes compared to the previous few nights), my respiratory rate dropped from 14.9 to 14.5, my sleep disturbances dropped from 10 to 8, and my sleep efficiency went up by 2%. 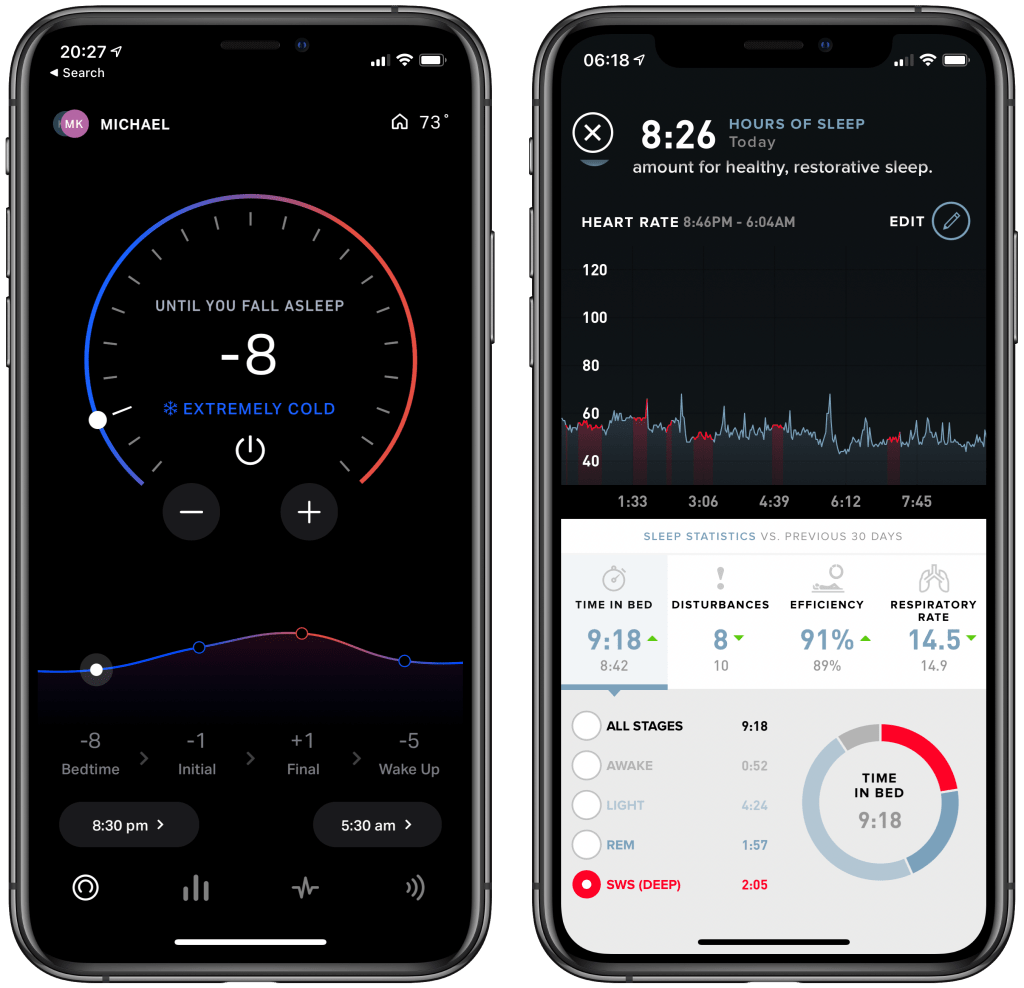 While that was beneficial for my recovery and HRV, it was too cold for everyday sleep for my own personal preferences. Since then, I have slept regularly and comfortably at -1 and have still seen improvements in my Whoop data.

Generally speaking, the colder temperature you’re able to tolerate, the better your sleep is likely to be. However, we all have preferences that have been built up over time — and the colder settings might be too “extreme” for some people (like me), despite their ability to produce optimal results.

But the good news is that my data shows that you’re likely to see significant improvements even if you opt for the lower settings, making the Pod Pro a good option for all types of sleepers.

How I feel since switching to Pod Pro

One interesting thing I’ve noticed since switching to the Pod Pro is that I feel less sore overall.

I train 5-6 times per week, which is the same as before I slept on the Pod Pro. Previously, I felt very sore after workouts. Since making the switch, I no longer experience that same soreness in the morning.

I think this might be because I get more deep sleep and am thus able to fully recover each night.

My workout buddies and I do the same workouts, follow a Paleolithic keto diet and take the same supplements. The big difference between us is that I sleep on a Pod Pro and they don’t. I’ve noticed that when they complain about feeling sore, I don’t feel soreness at all. Now, after intense workouts, I wake up the next day ready for the next training session.

Overall, the biggest change I’ve experienced since using Pod Pro is how I feel each day. I wake up recharged and more well-rested, and the data from my Whoop and Pod Pro backs that up.

Since the Pod Pro’s cooling technology adjusts to keep me sleeping at the right temperature for my body, I no longer have major sleep disturbances due to temperature and feel better overall.

If you’re someone who has been struggling with getting enough quality sleep, or if you suffer from insomnia or night sweats, I strongly believe that Eight Sleep can make a huge impact for you.