I’ve been sleeping on my Pod Pro for more than three months, starting in September 2020. Before using the Pod Pro, I had a difficult time getting enough deep sleep and I also found myself overheating during the night. Ever since I started sleeping on the Pod Pro, I’ve noticed that not only did my Oura Ring data improve, but surprisingly, my Levels glucose monitoring data improved, as well.

Before I started to sleep on the Pod Pro, I was getting practically no deep sleep whatsoever according to my Oura Ring data. However, when I began sleeping on the Pod Pro, my sleep score improved by 10 points on Oura, from a 67 to a 77. I’m now getting around 1-1.5 hours of deep sleep per night sleeping on the Pod Pro, compared to 0-2 minutes before, which is a major improvement. I set my Pod to 0 to -1 every night, and even the slight temperature difference has contributed to much deeper sleep. 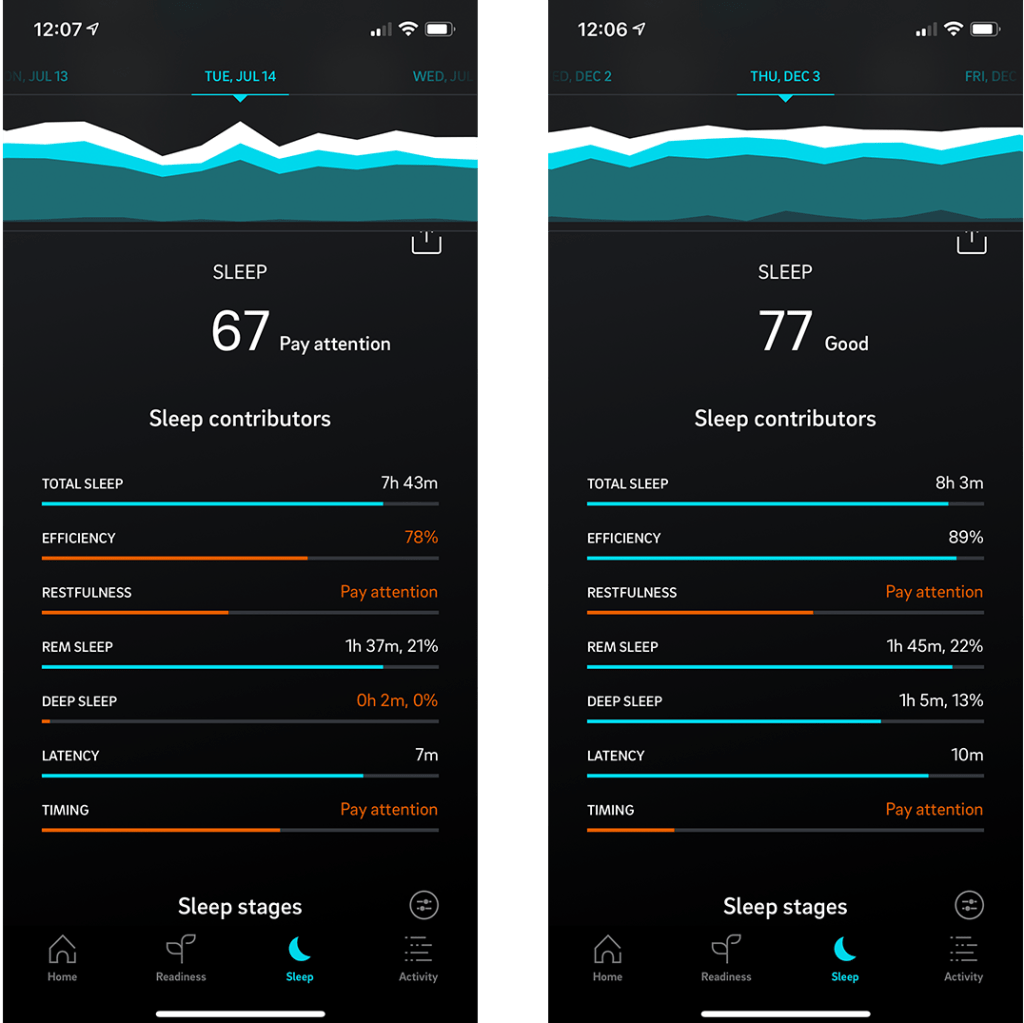 Within one night, my Oura Ring app told me I slept “Good”, whereas before, I’d never gotten that notification. I typically would’e received a notification to “Pay Attention” to my sleep because I was sleeping so poorly before the Pod Pro.

When I first started to use the Pod Pro, I noticed how much my glucose levels started to stabilize on the Levels app. I actually emailed Levels and asked if my sensor was defective because I could not believe that I wasn’t seeing any spikes, compared to a few weeks prior, when I would have spikes in my glucose frequently. They told me that my monitor was not defective, and in fact, my blood glucose trend was so good because my glucose had stabilized. 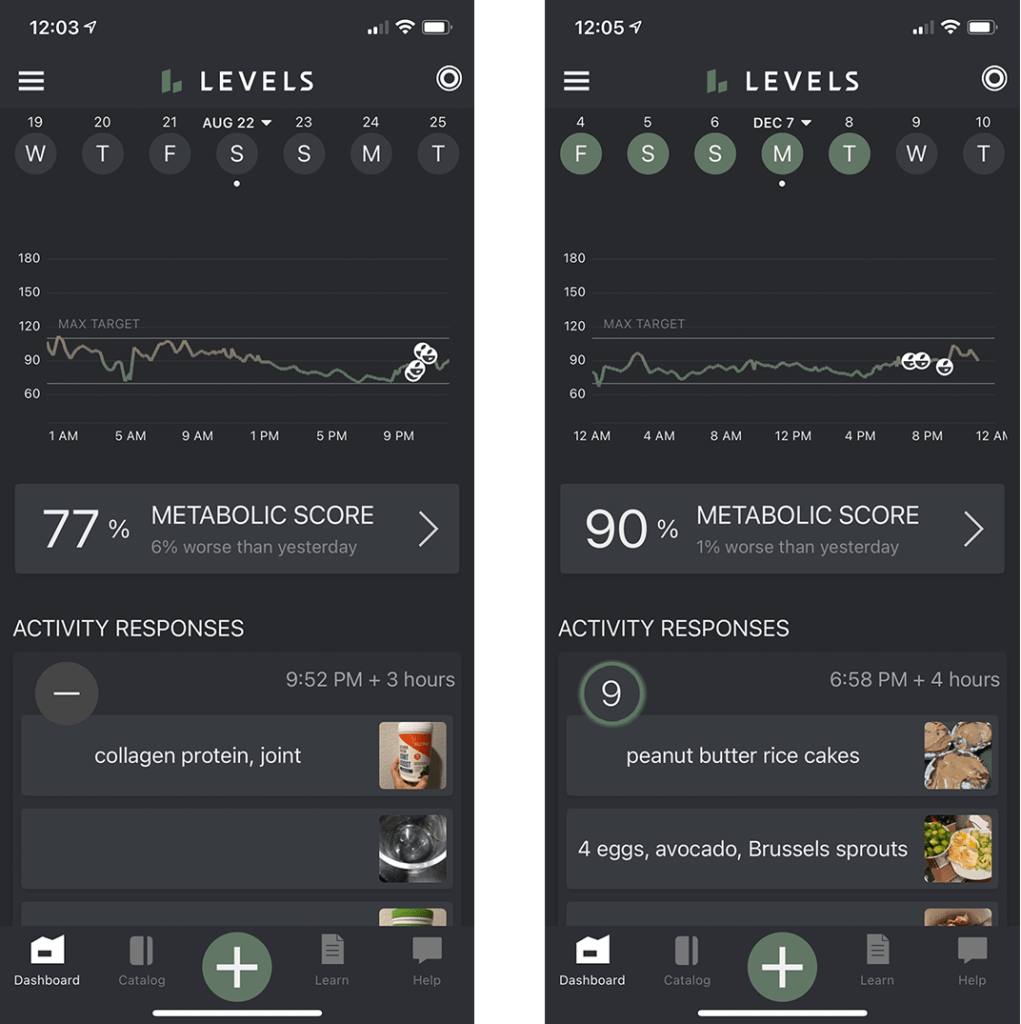 The only factor that I changed during that time was sleeping on a Pod Pro. Based on my other wearable data, as well as  how I felt subjectively, I know that my better sleep contributed to  an amazing improvement in my glucose levels.

The changes in my HRV since using the Pod Pro

Prior to sleeping on the Pod Pro, I would track my HRV (Heart Rate Variability) and recovery on my Whoop strap. I was rarely able to get my HRV high enough to reach triple digits. I always keenly tracked my HRV because it’s widely considered the best objective metric for physical fitness and determining your body’s readiness to perform. However, within the first few days of sleeping on the Pod Pro, I consistently was able to get my HRV in the triple digit range, based on both my Whoop and  Eight Sleep App data. Before, it felt impossible to improve my HRV. Now, all I have to do is sleep on my Pod Pro in order to recover efficiently and know my body is ready to take on the day’s challenges.

How I feel subjectively since sleeping on the Pod Pro

Before I started to use the Pod Pro, I experienced night sweats which caused major sleep disturbances for me. I would wake up feeling tired the next day, but never thought that it was something I could change. However, after sleeping on the Pod Pro for a few nights, I woke up more well rested and realized how much temperature was impacting my poor sleep quality. Sleeping at the right temperature for my body throughout the night made such a huge difference.

Additionally, fitness is extremely important to me. Prior to sleeping on the Pod Pro, I felt as if I had stalled in my fitness and muscle building abilities because I could not raise my HRV and recover fast enough due to my poor sleep quality. Now, my high HRV let’s me crush my workouts the next day.

In addition to feeling better overall, the Pod Pro has helped me sleep when I fast between  24-48 hours. I try to fast quarterly, and on the nights I do, I tend to get colder at night and have trouble sleeping. Being able to warm up my Pod specifically on those nights has helped me sleep soundly during my fasting periods, which are crucial for how I run my body.

One of the major things I’ve noticed since sleeping on the Pod Pro is that I don’t get as hungover when I drink. Before, when I would have a few beers a night, my Oura score would tell me that I essentially didn’t get any sleep  and I would wake up feeling awful. However, now,on  the nights that I drink, I'll set my Pod Pro to a much cooler setting. By doing that, I’ve noticed that my Oura scores aren’t dramatically affected, and I also don’t much better, which has been a huge game changer for me.

Not only has my health data on my Oura Ring and Levels CGM improved, but I feel much more well rested when I wake up and more energized throughout the day. This is reflected by increase in deep sleep, higher HRV, and more consistent glucose levels. Sleeping on the Pod Pro made me much more aware of the importance of sleep overall. It has brought to my attention that sleep is something that I can actively work on to improve my wellbeing and fitness overall, which is extremely important to me.