Here's How The Total Solar Eclipse Affected Our Sleep

A rare astronomical event occurred on August 21, 2017. It was the first time in nearly 100 years that a solar eclipse was visible in totality from coast to coast in the United States.

A solar eclipse is when the moon passes between Earth and the sun, thereby totally obscuring the sun. As the moon blocks the sunlight, day seems to turn into night. During this time, the sky goes dark, temperature drops and solar energy decreases.

There is a lot of speculation, but not a lot of science on the effect of solar eclipses on sleep - simply due to the fact that there aren't many to study. However, there is plenty of research on lunar cycles and sleep. A report in Current Biology noted that full moons tend to disrupt sleep. According to the study, people sleep about 20 minutes less and get 30% less deep sleep around the full moon. This is probably due to the reductions in melatonin, a light-sensitive hormone that controls the natural sleep-wake cycle.

Full moons cause the night to be brighter, whereas solar eclipses cause the day to be darker. So how exactly did this phenomenon affect our sleep? 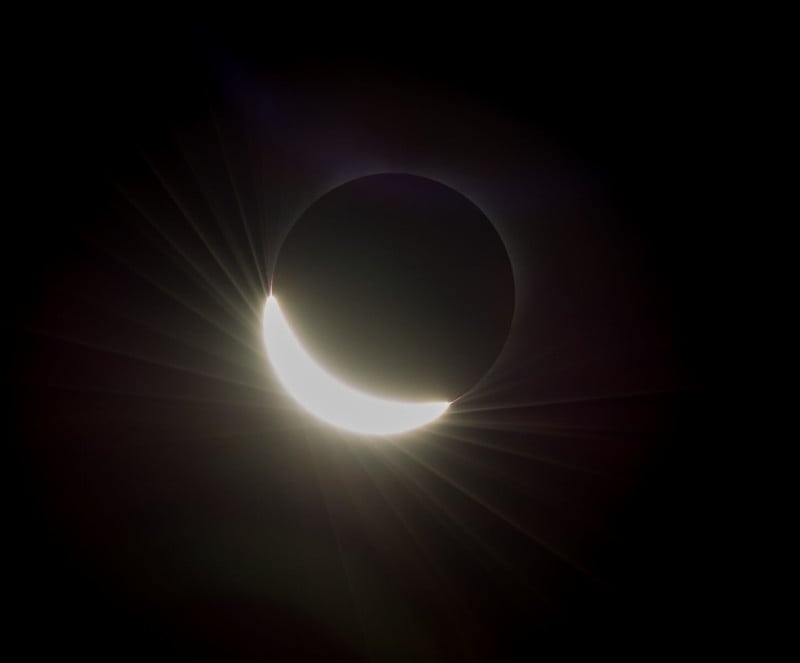 This photo shows the last glimmers of sunlight as the moon heads toward totality. Photo by NASA/Aubrey Gemignani.

Using the sleep data from over 10,000 people, we studied the night of the August 2017 Great American Solar Eclipse compared to the rest of the summer. We found that Americans had lower quality sleep on the night of August 21st. On average, people went to sleep much later, about 1 hour 23 minutes later to be precise. They also tossed and turned 32% more on the eclipse night compared to the past 90 days. In numerical terms, people tossed and turned 23 times compared to the summer average of 17. We also saw a dip in our user's sleep scores, with the average being 58 compared to 61. One of the most startling differences we noticed was the amount of deep sleep in Wyoming, which was a state in the path of totality. Those in Wyoming got 29% more deep sleep on the night of eclipse. Their sleep score, however, was still lower than the past 90 days.

Based on this data, we can surmise that the daytime darkness, or the hype surrounding the eclipse, had some effect on sleep. Whether it was physical or psychological is something that requires further scientific research.

Although there are no direct physical effects of a solar eclipse on sleep, there are a number of strange things that do happen. For many animals, the onset of darkness signals their nighttime behaviors. Nocturnal animals like owls and bats come out to hunt and birds get confused. During the 2001 solar eclipse over Africa, most birds fell silent as the sun disappeared. Other bizarre observations include a bunch of whales and dolphins surfacing, captive squirrels becoming agitated, butterflies disappearing from the sky, geese not feeding, and chickens huddling together.

A total solar eclipse like this one will not cross continental US from coast to coast again until 2045. By then, who knows what kind of research capabilities we'll have? Here's hoping the effect of solar eclipses on sleep will be studied once more.