Want to Optimize Your Brain Health? Starting with Sleep is a No-Brainer

Up until the end of the 20th century, most researchers studying sleep and the brain were concerned with maximizing human efficiency while minimizing sleepiness. The idea that sleep plays a central and indispensable role in health was nascent. Now, countless scientific studies suggest that what happens during sleep — particularly in the brain — influences everything from our problem solving capability and our emotional well-being to our risk of health conditions associated with aging. We’ll explain the impact of sleep on your brain, how the brain changes with age, and why you should consider taking a breakthrough product called Matter by Elysium Health to support your long-term brain health.

There’s no denying that humans have excelled at change and progress. While most animals have kept the same basic routine throughout their existence, humans moved quickly from a life of hunting and gathering in the elements to a system of working, living, and consuming that seems to defy nature. But as products of evolution, there are limits, according to renowned circadian neuroscientist, Dr. Russell Foster, director of the University of Oxford’s Nuffield Laboratory of Ophthalmology and the Sleep and Circadian Neuroscience Institute. In reality, he says, “every aspect of our physiology and behavior is constrained by a 24 hour beat arising from deep within our evolution.”

This beat is our circadian rhythm, hardwired from millions of years of the world spinning around, a product of our own internal biological clocks and environmental cues, particularly the rising and setting of the sun. Circadian rhythms govern our behavior, hormone levels, sleep, body temperature, and metabolism. We ignore this coordination between our bodies and nature’s rhythms at our peril, Foster says.

The alignment of the internal and external day provides the backdrop for proper cell function, gene transcription, metabolism, and much more on the cellular and molecular level. During our active, daytime phase, we use more energy while consuming food and water; meanwhile, organs are prepared for the intake, processing, and uptake of nutrients. Then, during sleep, our bodies go about the business of cellular repair, toxin clearance, memory consolidation, and information processing. “Disrupting this pattern, as happens with jet lag or shift work, leads to internal desynchrony and the failure to do the right thing at the right time,” Foster says.

The consequences of getting insufficient sleep

Waking up refreshed from a good night of sleep is its own endorsement; likewise, feeling slow and groggy can be a real downer. But scientific studies point to concrete evidence associated with sleep or lack thereof. Foster points to a variety of short- and long-term changes in people who don’t get sufficient sleep.

Short-term sleep loss can result in a variety of behavior changes. People who are sleep deprived are more impulsive, e.g., more likely to run a red stoplight. They also exhibit less empathy and are less likely to pick up on social cues of friends and family. Their ability to lay down memories and problem solve — their overall cognition — is also reduced. One’s sense of humor is also affected. Sleep deprived people also release more of the hunger hormone ghrelin, promoting the consumption of carbs and sugars and possibly weight gain.

Longer-term sleep loss, as codified in studies on shift workers over the course of five, 10, 15, or 20 years, can result in more serious issues. People can become very stressed and have higher levels of cortisol, which can suppress the immune system. Long-term shift workers have higher rates of infection, cancer, coronary heart disease, and metabolic issues such as type-2 diabetes. Finally, chronic lack of sleep can make people more vulnerable to mental health problems like depression, bipolar disorder, and anxiety.

The evidence is conclusive — and doctors take note. Michael Sagner, M.D., a sports medicine and preventive medicine specialist in Europe, considers sleep an essential component of work with his patients (which includes professional athletes). “Sleep and stress management are key elements in our work with patients,” he says. “Many patients take sleep lightly and do not fully understand the significant impact it has on health, well-being and performance. We make sure the patients understand the importance of sleep and work on routines and habits to achieve good sleep.”

How the Brain — and Sleep — Change with Age

Sleep quality tends to degrade with age. In particular, a measure called “sleepfulness after sleep” decreases — a fancy way of saying that while older people may fall asleep just fine, their sleep that follows is more interrupted, lighter, and generally shorter in duration. A common estimate is that between 40 and 70 percent of older adults experience chronic sleep problems. This can lead to a challenging cycle in older people, where lack of sleep begets impaired brain processes and impaired brain processes beget lack of sleep. This is true in diseases of aging like Alzheimer’s and dementia, but it’s also true of common challenges of aging. For example, pain for sore muscles and joints might keep an older person up at night, while not sleeping doesn’t allow the body to heal those aches and pains with appropriate hormonal and immune responses.

Another fact about the aging brain that may surprise you: As we age, the brain shrinks. And not just a little bit. “This process begins in our 30s and accelerates from the age of about 40 so that by the age of 60 the brain is shrinking at about 0.5% per year, a loss of 7 mL of tissue each year,” says A. David Smith, Professor Emeritus of Pharmacology and Founding Director of Oxford Project to Investigate Memory and Ageing (OPTIMA) at the University of Oxford. “It has been found that many health-related factors can influence the rate of atrophy.” One of those health-related factors is disturbed sleep patterns. 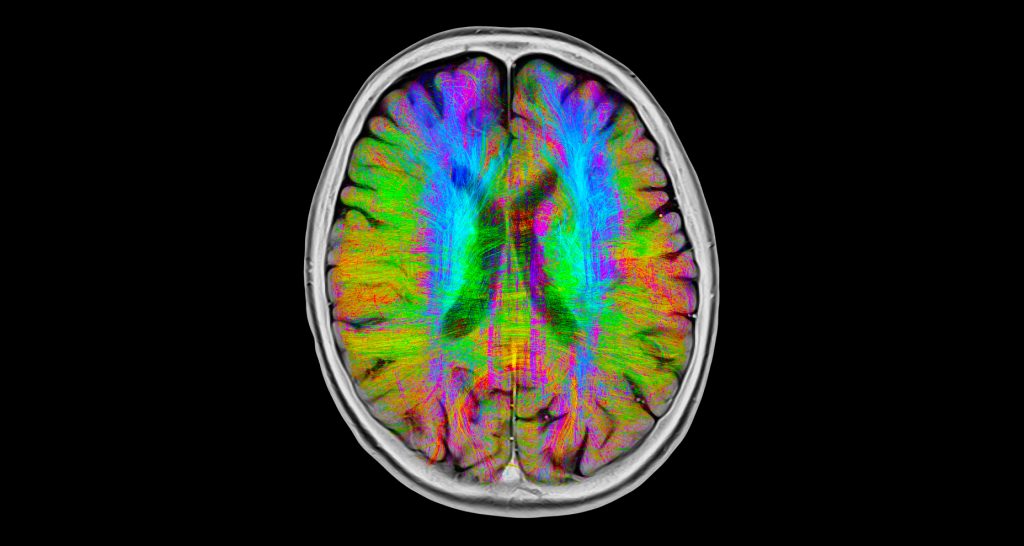 Fortunately, it’s not all doom and gloom. There are concrete steps you can take to improve sleep and help support your ongoing brain function.

Like your sleep, you don’t have to leave your brain health to chance. Smith says that beyond leading a healthy lifestyle (including getting proper sleep), nutrition plays a fundamental role. He points in particular to an amino acid found in the blood called homocysteine, which we tend to have more of as we age. “It appears to cause increased atrophy of parts of the brain that are important for memory and so may be one of the causes of age-related memory issues,” Smith says. In the groundbreaking VITACOG study, Smith and colleagues showed that homocysteine can readily be lowered by taking a specific B-vitamin complex — and that doing so also slows the rate of age-related brain atrophy. This, along with evidence that a good omega-3 fatty acid status increases the efficacy of the B-vitamin complex, led to Matter by Elysium Health. 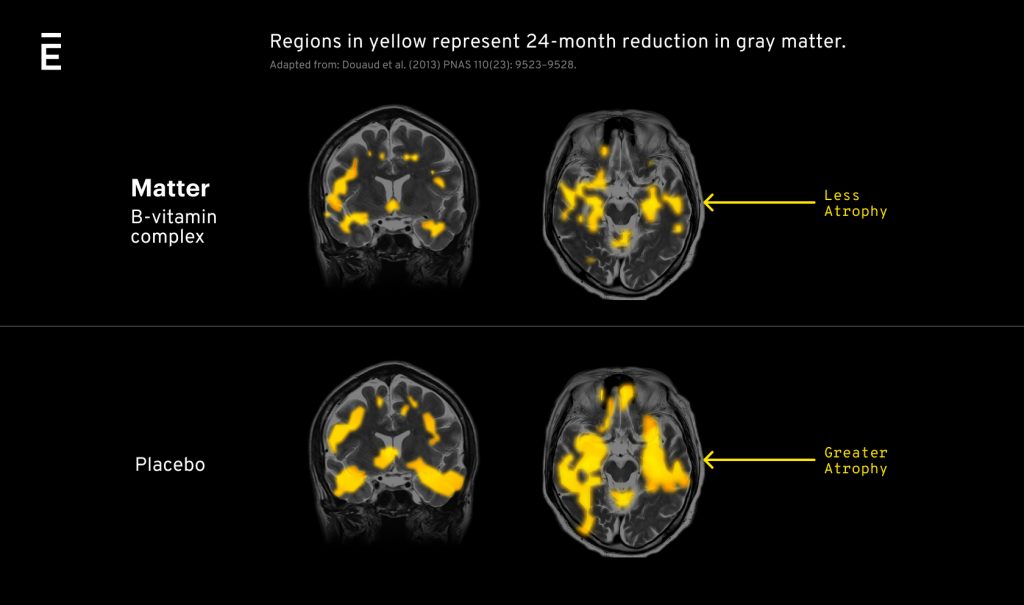 Matter was developed in exclusive partnership with the University of Oxford. It combines the innovative B-vitamin complex clinically proven to slow brain atrophy in older adults with mild memory concerns in the Oxford study, a unique powdered omega-3 lysine complex with enhanced bioavailability to increase the omega levels so that the B-vitamin complex can work more efficiently, and bilberry extract rich in plant-based antioxidants called anthocyanins to provide complementary cognitive benefits.

And there’s clinical research to back it up: the specific B-vitamin complex, which powers Matter, is proven to slow grey matter atrophy in regions of the brain that are important to spatial long-term memory and visuospatial learning by an average of 86% in the VITACOG study participants over two years.

Sagner agrees that fine-tuning with nutritional supplements can be beneficial. “After we have worked on optimizing lifestyle factors such as diet and sleep with our patients, it sometimes makes sense to add certain nutritional supplements,” he says. “It is important to understand that many supplements have little or no scientific basis. Only a few substances have been scientifically proven to support health and wellness, such as the combinations used in Elysium products. Just based on the very (very!) solid science, we recommend Elysium’s Matter.”

In addition to taking Matter and getting plenty of sleep — Sagner recommends between six and eight hours of good sleep, “with the emphasis on good” — there are plenty of other things you can do to support the health of your brain.

To jumpstart your brain health, Eight Sleep members get 15% off a semi or annual subscription to Elysium Health's Matter.